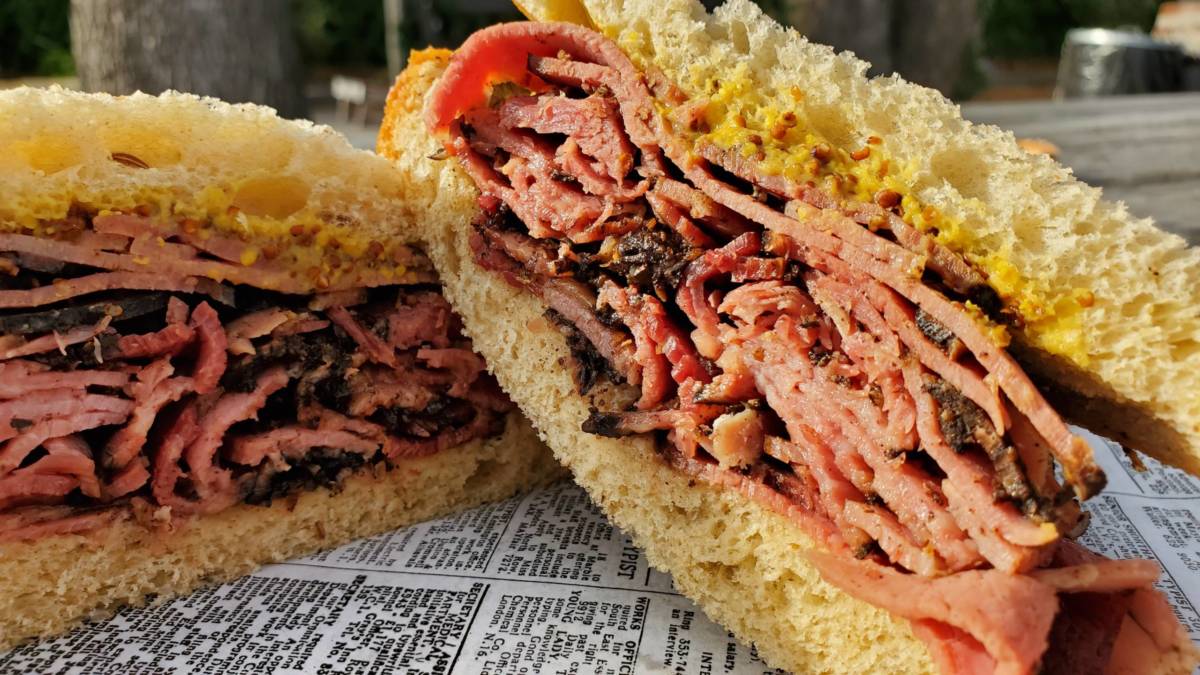 The name pastrami comes from Romanian pastramă, a declination of the Romanian verb păstra meaning “to conserve food, to keep something for a long duration” whose etymology is linked to the Bulgarian pastrija or to Turkish pastırma, short for Turkish: bastırma et “pressed meat.” Wind-dried beef had been made in Anatolia for centuries, and Byzantine dried meat is thought by some to be “one of the forerunners of the pastirma of modern Turkey”.

Early references in English used the spelling “pastrama”, closer to the Romanian pastramă. Pastrami was introduced to the United States in a wave of Jewish immigration from Bessarabia and Romania in the second half of the 19th century. The modified “pastrami” spelling was probably introduced in imitation of the American English salami. Romanian Jews emigrated to New York as early as 1872. Among Jewish Romanians, goose breasts were commonly made into pastrami because they were inexpensive. Beef navel was cheaper than goose meat in America, so the Romanian Jews in America adapted their recipe and began to make the cheaper-alternative beef pastrami.

New York’s Sussman Volk is generally credited with producing the first pastrami sandwich in the United States in 1887. Volk, a kosher butcher and New York immigrant from Lithuania, claimed he got the recipe from a Romanian friend in exchange for storing the friend’s luggage while the friend returned to Romania. According to his descendant, Patricia Volk, he prepared pastrami according to the recipe and served it on sandwiches out of his butcher shop. The sandwich was so popular that Volk converted the butcher shop into a restaurant to sell pastrami sandwiches.