The Story of James “Hank” Hankins 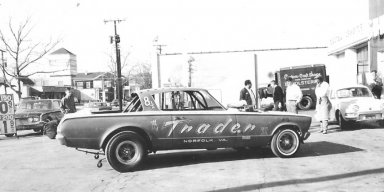 James Hankins was born in Darlington, South Carolina in 1930. He left Darlington at an early age, learning the auto body repair and painting craft up north before settling in Norfolk, Virginia where the skills of his craft grew and he became affectionately known as “Hank” Hankins. In 1958, Hank opened a successful auto paint and body repair shop in Norfolk which was his first foray into building and driving race cars and eventually drag racing. His body repair and painting skills taught him to appreciate the fine craftsmanship of drag racing cars, while the quest for more power and faster speeds satisfied his mechanical needs.

Although Hank’s passion for racing was strong, his love of his family was equally so. Hank and his wife, Georgia Mae, raised nine children, all while juggling drag racing and several businesses including Hank’s Curb Service Store. Although Hank did not have much spare time, he always found time for his family.

Hank began drag racing at nearby tracks in Virginia and North Carolina so he could operate his business without undue time away. Eventually, Hank met and befriended Dan Weis, a Virginia racer who later gained fame as the promoter of Richmond Dragway and had a reputation for booking top name, traveling professional racers. Weis was also fond of promoting a local hometown hero driver against the visiting traveler. Many times the local hero was Hank, who always put on a good show and sometimes even upset the professional racers.

Always the underdog, Hank challenged his opponents with his homebuilt cars – the “Hooter Scooter” and “The Trader.” The crowds would roar their approval whenever Hank would enter the track. Weis loved to pit the “hometown hero” against the national star and Hank raced many stars including Dick Landy, Ronnie Sox, Tom Sturm, Don Gay and even Richard Petty. Thanks to Hank’s cunningly sharp driving, many times he would even outrun the professional racers. The successful combination of Hank’s cars and his driving nabbed him several Super Stock Eliminator wins at Virginia and North Carolina tracks. His competitiveness and clean, hard running cars also earned Hank a favorable reputation among fellow racers, track operators and officials.

After an untimely and serious crash at Roxboro, North Carolina left Hank injured and his race car destroyed, he decided to revise his involvement with drag racing, becoming the manager-promoter at Suffolk Dragway. A former airfield with concrete runways, Suffolk was famous for its excellent traction. Hank managed Suffolk Dragway until 1972 and in that time he created many standout and enduring events such as the hugely successful “Little Guy Nationals,” a breakthrough event that featured Sportsman racers instead of big-name nitro pro heroes, and the “Dixie Drag Classics,” an event that ran for multiple years at Suffolk. During this period, Hank also took on the promotion and operation of Langley Speedway, a storied short circle track in Hampton, Virginia. Finally, in 1973 Hank took over Virginia Beach Dragway which he managed until 1980.

Hank Hankins gave many Virginia and North Carolina racers their “big break,” the chance at moving up the ladder to faster and more lucrative racing. Some of these racers even became successful pro racers. After a non-stop life of never standing still, James “Hank” Hankins earned a much-deserved rest when he passed away November 26, 1994, in his hometown of Norfolk, Virginia. In 2016, the East Coast Drag Times Hall of Fame respectfully inducted James “Hank” Hankins to its ranks.

Hank’s Filling Station, which inhabits the same location as the original Hank’s Curb Service Store, is proud to pay tribute to local hero Hank Hankins, whose lifetime and career achievements touched tens of thousands of individuals.

*Story adapted from “Hank Hankins’ Non-Stop Journey As A Larger-Than-Life Drag Racing Legend” by Jim Hill posted May 2, 2017 on eastcoastdragtimeshalloffame.com